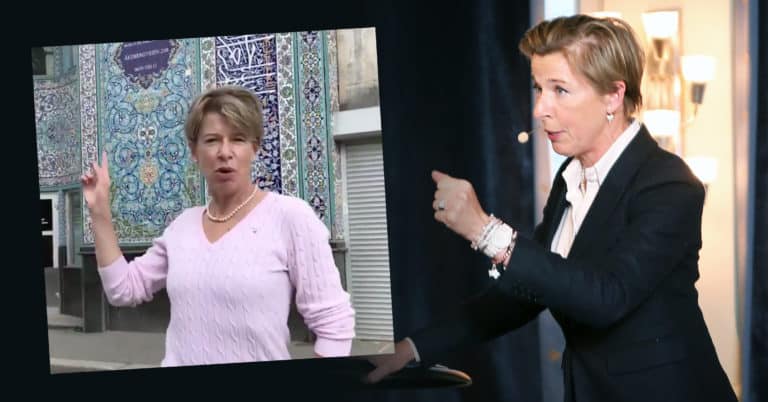 The words, meaning «vulgar bully», was taught to her by editor of the far-right website Document, Hans Rustad, who had been referring to a recent headline in Norwegian daily Dagsavisen describing Hopkins as a «vulgar bully with racist provocations».

But as Hopkins’ recital of the two Norwegian words went down well with her supporters in the sparsely packed auditorium, the scattered chuckles could not compete with the massive outbreak of LOLs she got from posting a video to Twitter earlier the same day.

In the video, Hopkins is seen standing outside the World Islamic Mission mosque in Grønland / Tøyen, a 15 minute walk east from downtown Oslo.

The area was made famous amongst right-wing trolls after another islamophobe (and Hopkins acquaintance), the conspiracy nut «Peter Sweden», made a similar video last summer, portraying Grønland as a intensely dangerous «no-go zone» (where he miraculously could go for a stroll and take pictures).

Much like Peter Sweden, Hopkins is claiming to address «what no one really wants to talk about», namely that «the east is rapidly being taken over».

«This place is starting to become kind of overrun with somali gangs, starting to get inside the local councils, police starting to patrol the east less», she says – just as a woman with long blonde hair is passing by in her running gear: 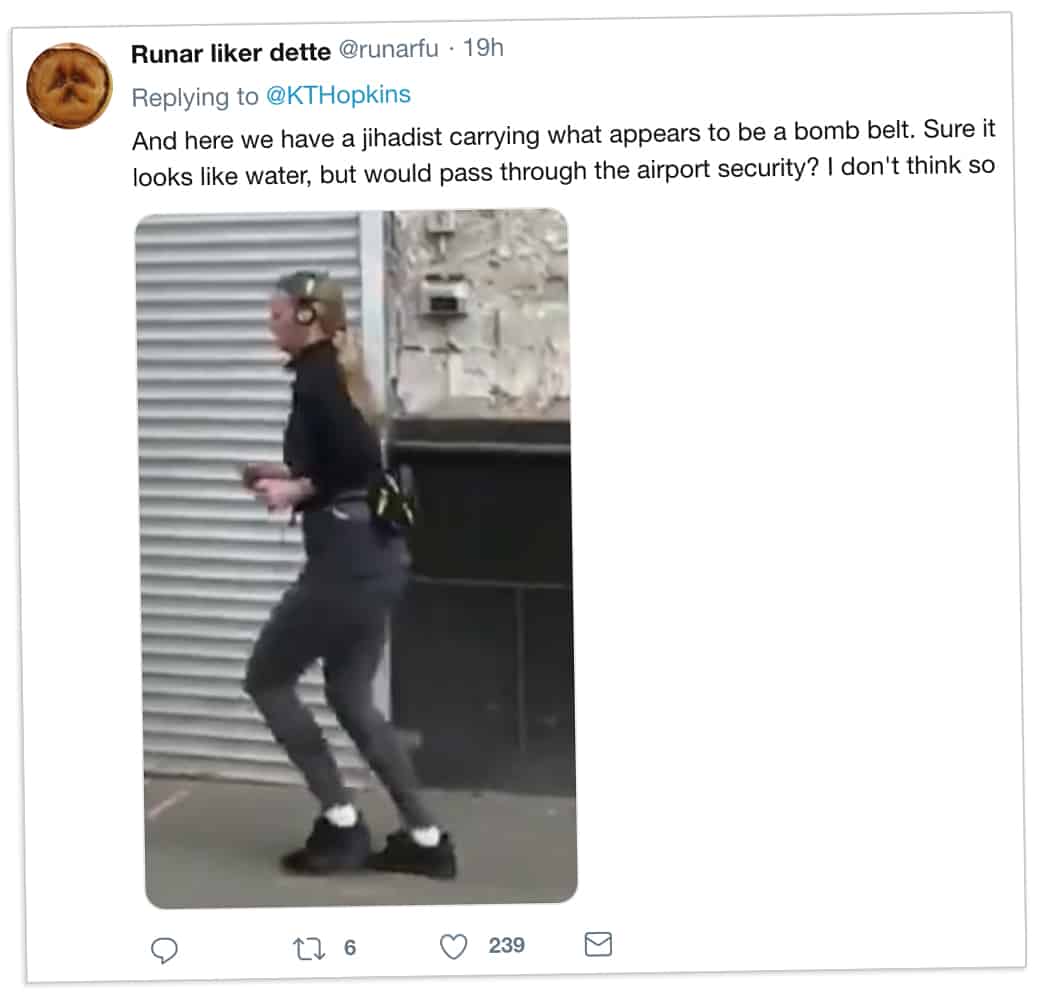 Yes, Grønland was invaded – but by hipsters

People actually living in Oslo (and not just making a brief visit to warn about «white genocide» or express «concerns» for the jewish minority while at the same time promoting anti-semite ideologists) did not hesitate to provide Hopkins with some actual information about the Grønland area:

The fact that Hopkins actually is facing the huge complex that is Oslo’s police headquarters (on the other side of the street), was pointed out by several locals watching the video. They concluded that the activist’s concern for police patroling in the area is «utter bollocks». (Did we use that correctly?)

One helpful Twitter user even made a simple map (never mind the weed smoking by the police HQ): 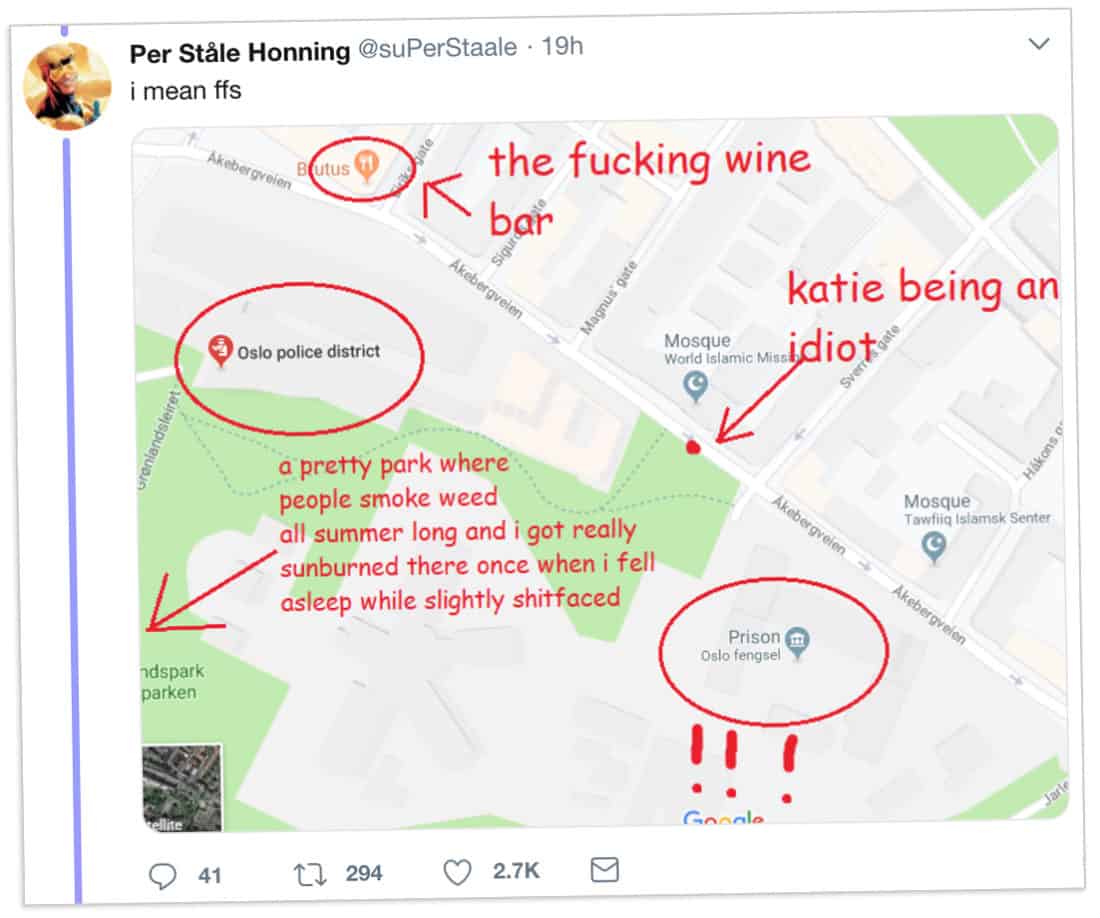 Grønland and adjacent Tøyen is one of the city’s most popular and diverse neighbourhoods. Hopkins is standing two blocks away from a wine bar specialising in natural wine, oysters and bloody marys. Housing here does not come cheap:

And there’s more: The street below Hopkins’ stand up is the starting point for Oslo’s huge pride parade each year (Hopkins is known for transphobic statements as well and would probably not approve of the LGBT celebration taking over the neighbourhood), with a large church on one side of the street and a mosque in a neighbouring block, separated by a craft brewery and a Starbucks which recently replaced an immigrant phone shop. 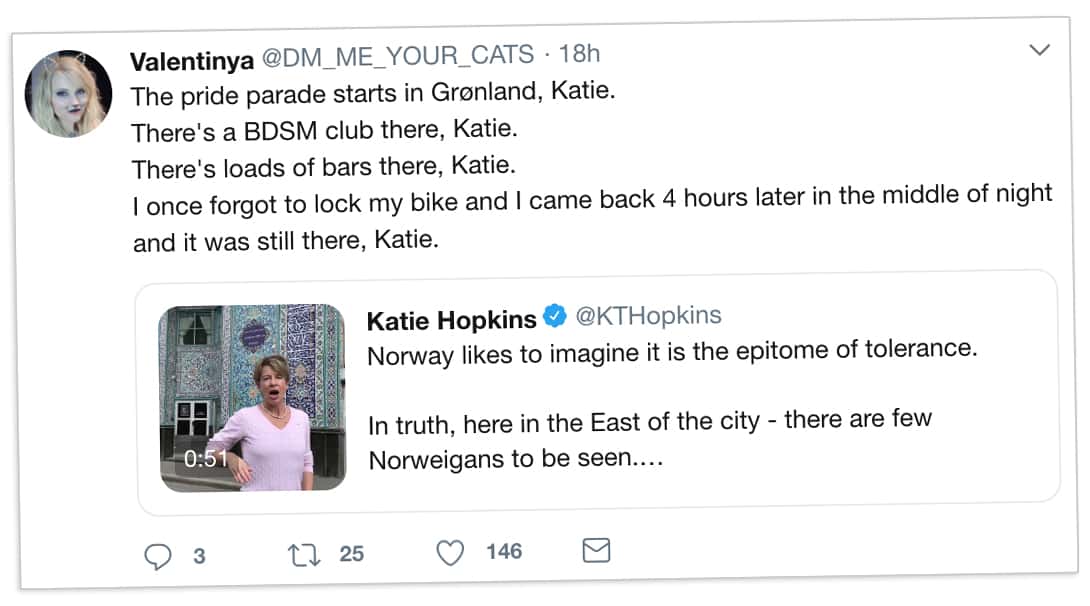 Yes, this is the area of Oslo’s botanical gardens, the Munch museum and a place called «Brooklyn Burger Joint» serving meatless burgers (£12) across from a public library which is open until 11 PM. Did we mention the church?

Granted, street crime and relative poverty isn’t unheard of, if you stay for a week you would probably see a niqab, and this is also the neighbourhood of Norway’s celebrity muslim extremist Mullah Krekar (see, Katie, we can help with your research) – but the threat of getting hit by half-drunk hipsters on electric scooters leaving the nearby 13-pound-a-drink cocktail bar is certainly more imminent than islamism or stabbings.

There hasn’t been a riot here since the independent coffee shop ran out of avocados. (Ok, that didn’t happen).

Grønland and Tøyen is a no-go-zone only if you’re afraid of someone resorting to freshly made hummus or undrinkable craft beer in lack of milkshake. Oh, wait, there’s milkshake as well: 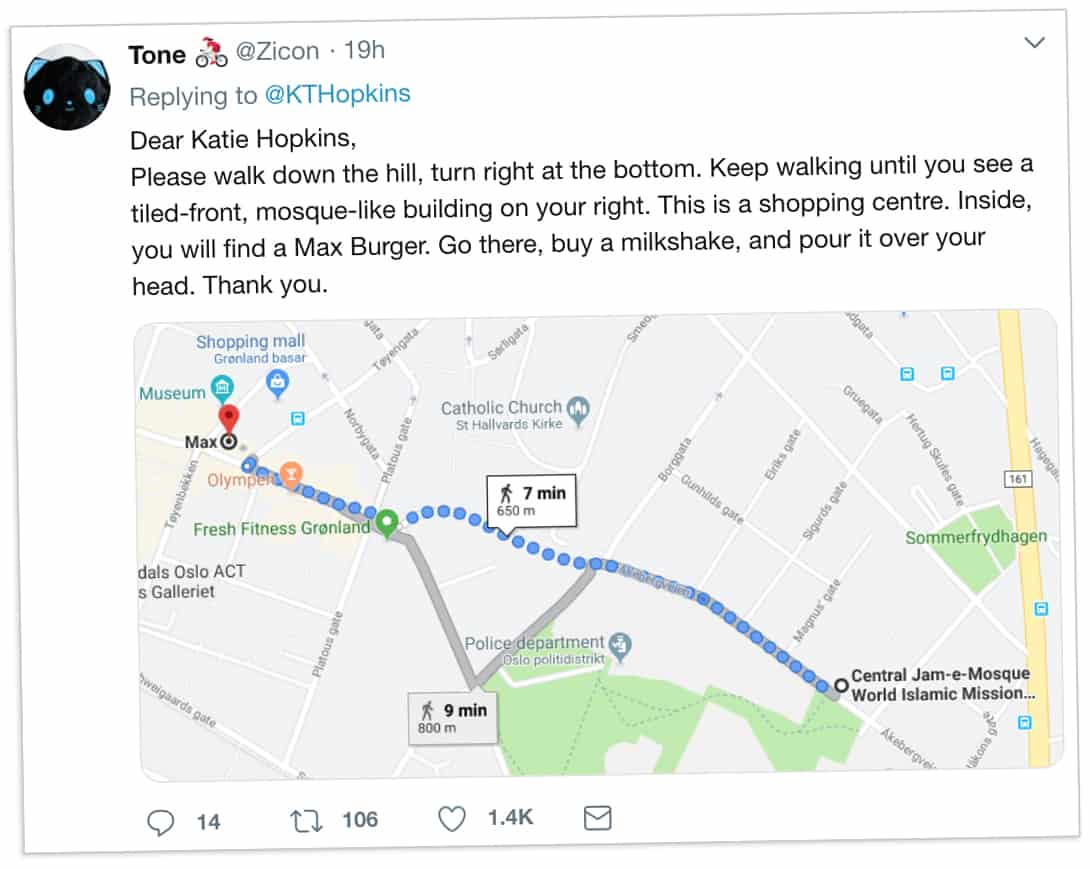 And you could also just leave, as suggested by a Norwegian TV personality:

The mosque video wasn’t Hopkins’ only social media post during her stay in Oslo. She also stalked random people shopping for vegetables, and got up in front of the national assembly to talk about the upcoming EU parlament elections. (Norway isn’t even a member of the EU, so we’re unsure why).

Maybe not a «vulgar bully», but…

In Oslo Military Society on Wednesday night, Hopkins received gratitude «for addressing the muslim problem», praised Donald Trump and claimed to have bigger balls than Steve Bannon after a member of the audience, a former leader in the  Pegida movement, told her that he did not like Bannons soft take on islam.

The anti-muslim writer could not be spotted last night, but quite a few from the Bannon crowd – people from organisations like Stop The Islamisation of Norway (SIAN), the anti-Islam blog Human Rights Service (which is state-funded), far-right website Resett and politicians in the Progress Party, currently part of Norway’s coalition government, seemed to enjoy Hopkins’ speech.

The event also featured a screening of her new film «Homelands», describing how jews are being forced to leave Europe because of muslims, but without Hopkins mentioning that she recently promoted an event headlined by the anti-semitic psychologist Kevin MacDonald to her fans on Twitter and shared a stage with Holocaust denier Ingrid Carlqvist in the UK.

Hopkins later talked about how whites are being killed in South Africa, but did not elaborate on the fact that she was detained in the country for spreading racial hatred in February 2018. She did not repeat her former comparison of immigrants to «cockroaches», but bragged about her being yelled at by editors when she held jobs in the «mainstream media».

After all, Katie Hopkins’ trip to Oslo may not have offered proof that she is a «vulgær bølle», a badge she claimed to «wear with pride» on stage last night. But to many Norwegians on Twitter, she still managed to come across as quite an «idiot». Oh, that’s the same word in both Norwegian and English!